An early adopter of the digital art form, Stanford creates kaleidoscopic photomontages that capture Las Vegas’ iconic aesthetic and legendary neon signs and display his compelling mix of traditional photography and experimental digital art. The artist engages with his native Las Vegas, while reflecting his own Buddhist practice in his work. His art reflects an interest in transforming views of reality into imagined realms. Drawing on his own belief in Buddhism, he conceives of his digital montages as modern mandalas, offering them up as maps towards inner zen. 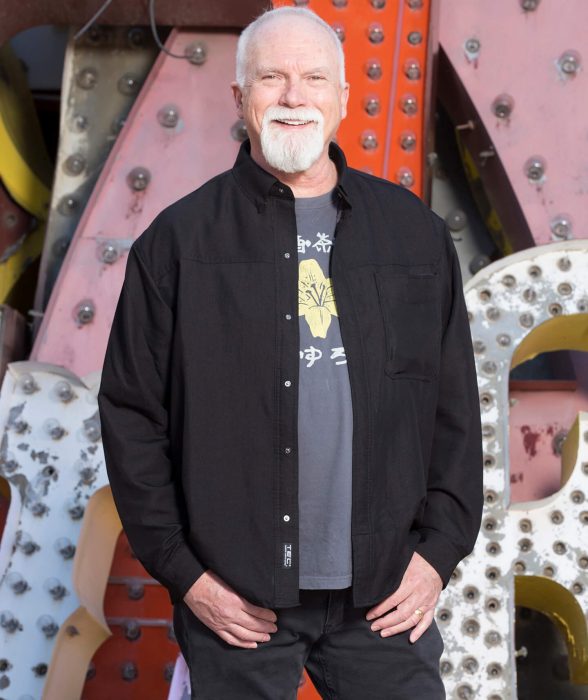 American artist James Stanford’s diverse practice includes photography, digital illustration, painting, and drawing. Stanford studied painting at the University of Washington (UW) (MFA) and the University of Nevada Las Vegas (UNLV) (BFA). Dedicated to creativity and the fine arts, he has taught at UNLV and UW, established the Smallworks Gallery, and curated exhibitions at various venues, including the Las Vegas Contemporary Arts Center.Today, Stanford is well known for his edition series Indra’s Jewels, a group of digitally reinvented mosaics of patterns that are at once decorative and contemplative. The vibrant images are reminiscent of physics-like models of space, but also have an immaterial, spiritual quality, evoking the artist’s strong connection to Zen Buddhism.Stanford credits his experimental approach to a transformative experience that occurred during his first visit to Europe in 1968, at the age of 20. At the Prado Museum in Madrid, Stanford saw Rogier van der Weyden’s deeply religious painting Deposition (1435) and was changed forever.The encounter provoked in Stanford an episode of shock, even ecstasy, of the kind known as Stendhal Syndrome – when exposure to a particular artwork of great personal significance produces an intense psychosomatic reaction.‘I fainted in front of this painting. I was unconscious for 15 minutes. I woke up with a flash grasp of many of the painting techniques that he used. This started my devotion to painting. To me, it is part of my personal religion. Not the Christian aspect, but the artistic aspect, made me whole again.

In many ways, this response of fainting, or falling, is significant. One feels that there is a quick descent or immersion in Stanford’s complex worlds. Although entirely abstract, his images create a sense of radiant light, shadowy space and an infinity of clear forms, a modern mandala. To create pictorial orchestrations of lived spirituality, Stanford uses the iconic vintage signage of Las Vegas, where he spent his childhood at a time when the town was small and provincial, without access to global culture. His layered images reflect a mirrored geometry that speaks of unraveling and recomposing – an endless view of being, of universal mystery. Printed on metallic paper, the works evoke a sense of infinite reflection.Beyond formal considerations, Stanford’s work responds to esoteric interests, artistic expressions of religiosity and spirituality, Zen Buddhism, and metaphysical concepts, including the creation of illusionistic fictive space. His interest in transforming reality into imagined realms has taken many forms, including an astonishing photomontage series, Indra’s Jewels. The series takes as its point of departure the Hua Yen Buddhist poetic concept of totality within the metaphorical story of Indra’s Jeweled Net. Today, as an artist concerned with the development of a visual expression of metaphysics and spirituality, Stanford has garnered the attention of the art world, as well as of contemporary Buddhists, sociologists and anthropologists.Along with being an innovator, Stanford has dedicated himself to supporting and developing art and artistic culture in local communities in Las Vegas. During his tenure as Las Vegas Arts Commissioner, he developed Lightscapes, a program that has been recognised by Art in America as one of the top 20 public art projects of the era. The program, which features epically scaled video art installations in downtown Las Vegas, has continued to earn accolades.The artist currently lives and works in Las Vegas. Additional work by Stanford can be viewed at JamesStanfordArt.com. – Rosa JH Berland